Finding a good venue for an event feels quite tricky. Especially if it’s an event that I feel so strong about, and really hope that everyone can have a good time. If there’s a dinner gathering, or just chatting with friends, then almost any restaurant or cafe can do. For a film festival that only happens once every few months and possibly won’t ever see the films again, those put much more pressure on the organizers – on us.

Last time we were at Insomnia Cafe, which worked pretty well. It’s pretty cozy (though that means limited space too), good atmosphere, and overall great place to hold a screening. Definitely a place to keep, even though it only covers part of the features of the venue we want to have.

Finding a good large venue on the other hand seems to be more difficult than I originally thought. Been checking out obvious choices – obvious because got them as recommendations from multiple people when I was asking around.

There’s Spot Taipei Film House, which would be a proper cinema. If only it wasn’t so ridiculously expensive, and in the same time relatively small…. 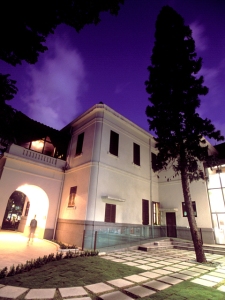 Then there’s my most favorite museum of the world, MOCA Taipei, they have a screening room, and I did watch movie there before. It’s much less expensive, and it would be quite interesting to watch such modern works of art as Future Shorts is, in such a modern art environment. It’s a bit small as well, though.

Then finally there were some suggestions that we can find venues at various universities. Looking around, most of them are very much not suitable for a screening, but there are exceptions. One of the most likely candidates is this conference room at NTU, which was also the venue of one of the TEDxMonga events. It’s spacious, comfortable, as close to cinema experience as a university auditorium can get…. Will likely have to check it out again to compare with my memories, but right now it looks like a good place for a Grande screening…

Now just get the ball rolling, there’s not that much time left till the end of May. Can we fill a room with 238 people for short films? I think we can.

His movie, The External World was part of the programme of our 2011 Winter screening. That film really surprised me with its sharp wit, insight and the kind of satire that I got used to for example when reading MAD. It’s the way to look at the world, pick out its absurdities, then amplify them until people cannot ignore what they see, have to confront them. It’s scary and liberating. It’s messing with your brain. …. I’m kinda not surprised that his Google+ tagline reads “Animating for World Peace”.

While looking around on Vimeo for other Future Shorts movies, I run into his other works, and been watching some of them, for example Please Say Something (click to see), a story of a relationship between Cat and Mouse. That was again messing with my brain, but left it illuminated.

A troubled relationship between a Cat and Mouse set in the distant Future.

I really like how so many of his works are freely available to show and share, but also can buy it if want to. Feels like it’s not just his movies which are set in the future, but also the way he does his work, art, and business is way ahead of the curve. And he did a lot of things, animating for U2, for MIA, for film festival opening, drawing to experiment, animating to perform. There’s just too many things to check, his films on Vimeo, or artwork on his site will keep me occupied for quite a while.

I wonder how messed up will I be after all that. But also can’t wait.